Home » What Makes a Great Guide?

I am generally not a fan of tours. All I can picture is fifty people “mooing,” and being herded around like cattle behind a guide with an umbrella or flag on a stick. It is not my idea of a good time. Constantly hurrying up to wait for slow participants is a drag. Spending only designated amounts of time on any one exhibit, historical piece or any other option and being chaperoned by a babysitting guide stinks.
I am more of a free spirit when it comes to travel. I am not a tourist, but a traveler. I love to meet the people, experience the culture, eat the local specialties, and go at my own pace. However, there is the occasional time when a tour is really the best route to take. I try to pick tours that take no more than 12 people at a time. This technique insures that I am not elbowed out of the way and unable to hear the information from the guide, that is the main reason I choose to endure a tour in the first place.
When it comes to art, architecture, history and local cuisine, I am not an expert. If I want to delve further into the, “behind the scenes” information I have to pay for a tour with a knowledgeable guide. So what makes a guide great? A guide needs to be:

All three women were very knowledgeable about their tour. They studied well, knew the information and were passionate about the subject they presented. So what made Brittney and I rate two of the tours so much better than the third. 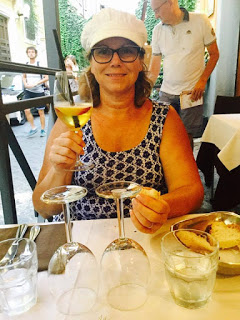 Francesca and the food tour ranked a 9. Francesca was: 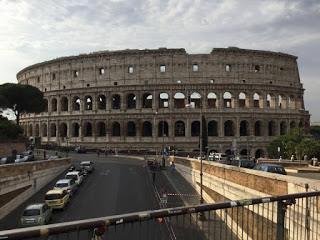 Allesandra and the bike tour ranked a 5.
Now this may not be completely her fault. We began with basically a private tour, just Brittney and me. The third lady would eventually meet us halfway through the tour. After chatting for a bit, Allesandra offered to take us on a different tour she thought we would enjoy more, but since I had never seen Trevi Fountain or the Spanish Steps, we opted for the traditional route. We had no idea this tour would a nightmare pop quiz of Roman history 101. So what went right? Allesandra was: 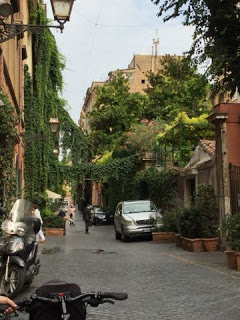 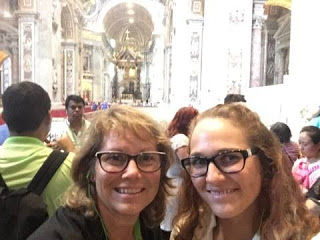 Brittney and I inside the Basilica

Christina and the Vatican/Basilica tour ranked a 9.
I thought Christina was doomed from the start. There were 20 people in our group, the place was packed, it was hot and after all the history from Allesandra, I started off bored. Despite this, Christina ranked an 8 with and extra point bringing her to a 9 for the great effort she took to make this, too big of a group tour for me, a pleasant surprise. 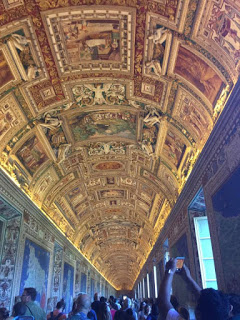 We learned a great deal of information about the Catholic Church history, former popes, power of the Vatican, Michelangelo, Rafael, and the Basilica. Even with all this history, too many people, too much heat, and lots of history, what made Christina a great guide? Christina was: 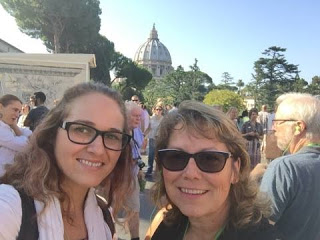 In the end I walked away learning a great deal. Not just about the history and subjects the tours covered, but about future questions I may want to ask a tour company before joining their tour. I would like to reiterate, I prefer doing things on my own. I don’t enjoy being herded around like cattle, but when I do want a little more information than I want to research myself, I will look for a guide like Francesca and Christina to enlighten my way!