Home » How I Enjoy the Colorado Snow

It is not necessary to be a hardcore skier or boarder to appreciate the snow in Colorado as an adventure traveler. I like to ski, but I don’t ride from open to close on any given day. I prefer to take pleasure in the snow and all that it entails in a relaxed, laid-back manner.

Colorado vs. the Pacific Northwest

Colorado snow is different than snow in the Pacific Northwest. In Oregon and Washington the snow tends to be heavy and wet, while the snow in Colorado is dry and light. The Pacific Northwest is forever green, and Colorado is brown especially in March. While Garrett and I drove from Denver up the mountain to the ski resorts, the brown began to change to white. Soon it appeared as if we were traveling through a sea of white that rolled up and over the towering mountains.

Keystone was the ski destination this year. Garrett and I have skied or boarded Winter Park, Breckenridge, and now Keystone. We arrived at the resort, donned our gear, and trekked through River Run Village with its ski shops and eateries. At the end of the village, the gondola, our carriage to the top, awaited us.

Climbing aboard, we zipped high above the snow, through the air, and toward the summit. Keystone sits in a basin surrounded by 360 degrees of mountains. Imagine being a single nugget of cereal left at the bottom of a white ceramic bowl. The mountains are so vast that you feel overwhelmingly small and insignificant. We soon disembarked at the peak, snapped into skis and boards, and headed down the first run. 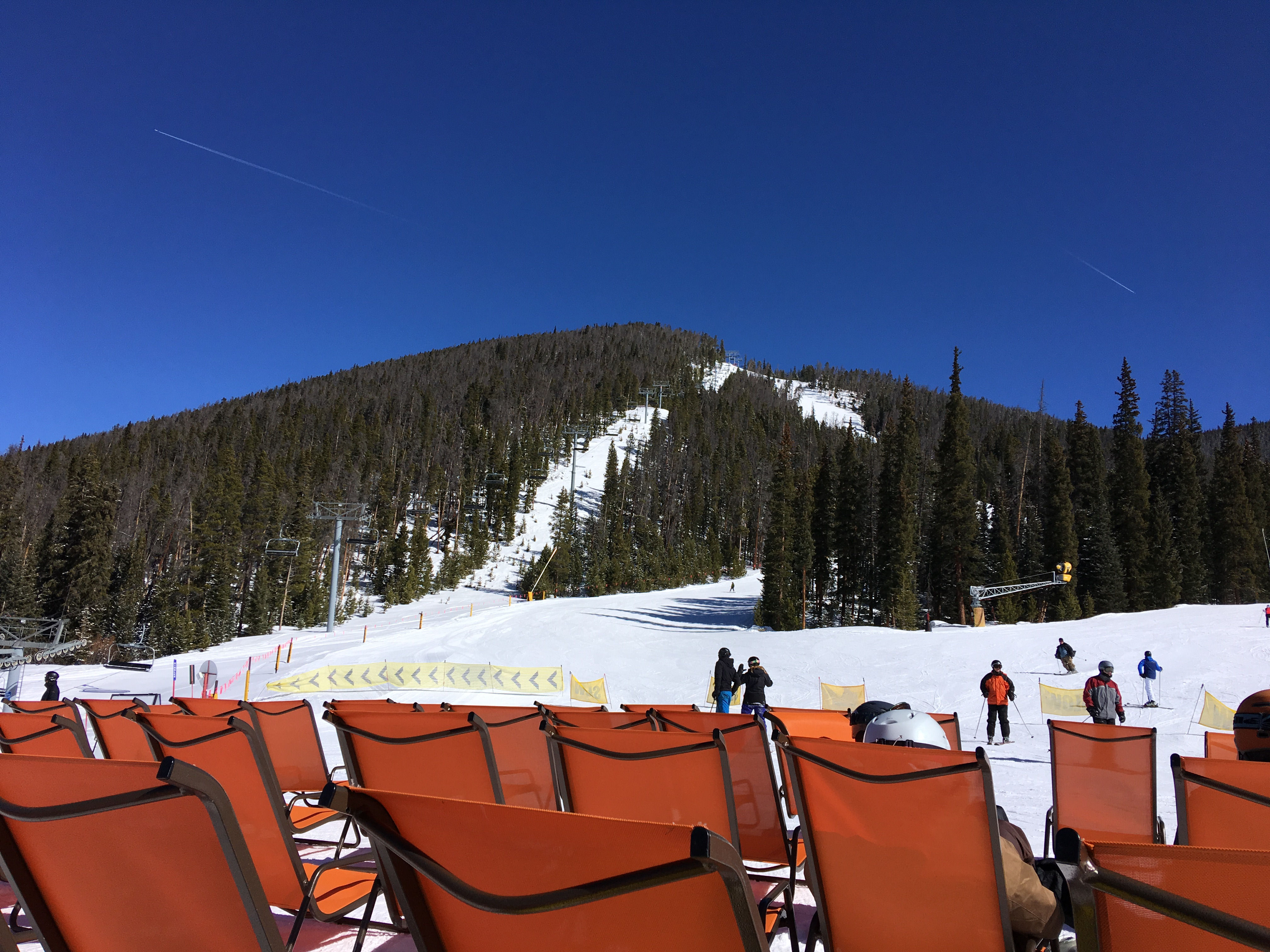 Snow beach at the bottom of Mozart Run

The light blue sky was like a calm and peaceful sea. The hot rays of sunlight coursed down and reflected off the pristine snow, breaching the crisp, icy air. The runs at Keystone are lengthy, taking three times as long to complete compared to the ones at Timberline in Oregon. After a few runs from top to bottom, we decided to ski the backside of the mountain. Heading down Mozart run we found it was much icier than the front side. At the bottom of the run, we discovered paradise. Restroom facilities, Adirondack chairs, music, food, and drinks awaited us. The BBQ smokehouse, Labontes, sits amidst this pristine snow beach on the mountain. The area is open from December through April of each year. Planting ourselves in the beach chairs, we soaked up the sun and took a break to relax. 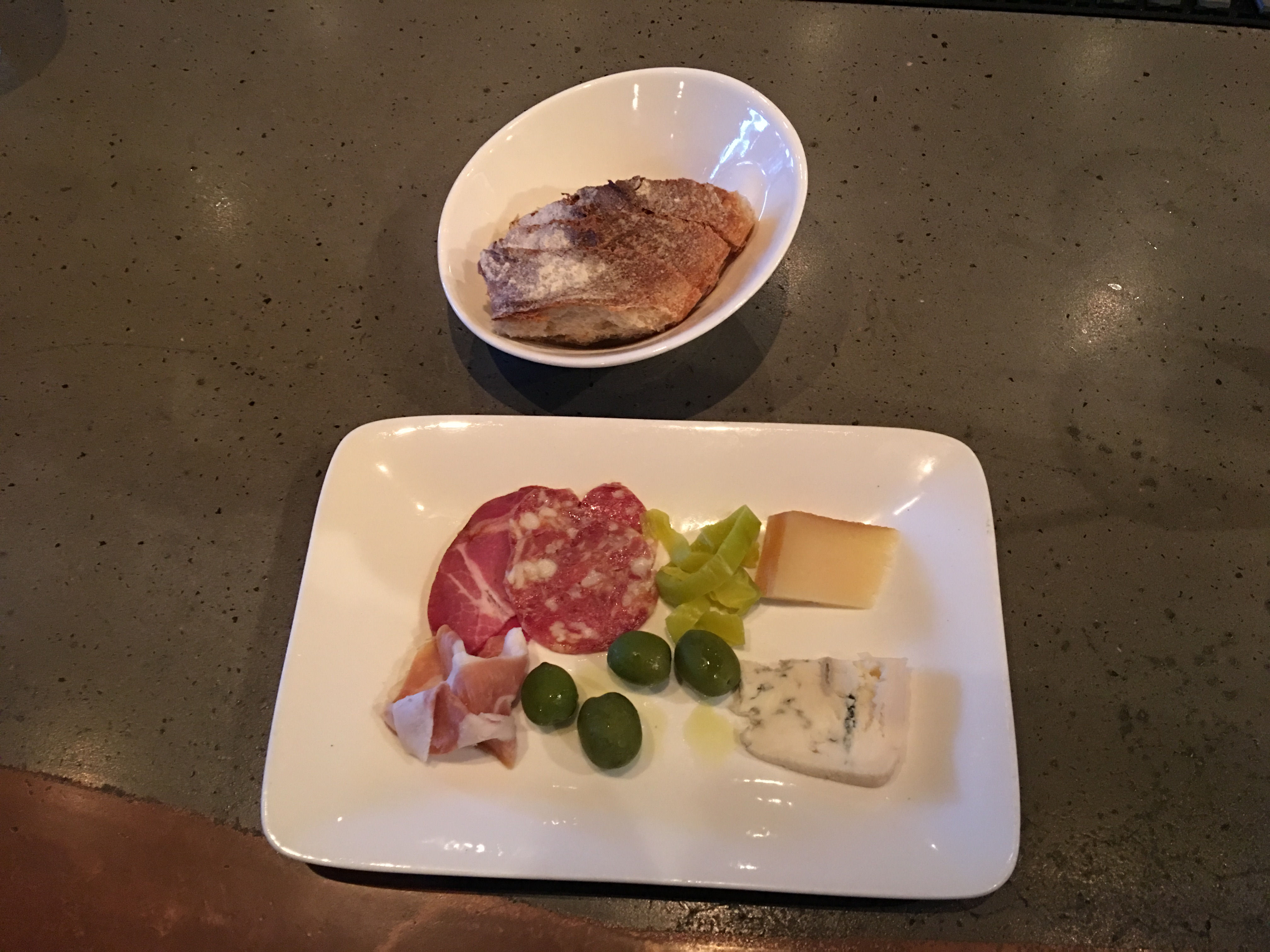 After resting, we traversed the chairlift to connect with the gondola and then proceeded back down the front side of the mountain. The New Summit Inn in Frisco was our short- term residence. The large room was comfortable, and the Inn served a small continental breakfast each morning. Frisco is one of the larger towns in the area with many shops and restaurants, and it is and only six miles from Keystone. We dined at Bagali’s, an Italian restaurant on Main Street. Garrett and I shared a cheese and charcuterie plate, a trio of duck plate, fettuccini Alfredo, and then we washed it down with a luscious Malbec.

The following morning we traveled back up the mountain. I packed my Nook tablet in Garrett’s backpack, and we headed down Mozart run. My quads were sore and my calves were tight from the long runs the previous day. Garrett felt energetic, so he headed back up the chairlift to make more runs while I deposited myself at the snow beach.

From the comfort of my beach chair I spent two luxurious hours reading and watching people ski and board down the mountain. Three runs end at the beach, and I watched as one man fell about halfway down the run on the right. This run was extremely steep; and after he fell, one of his skis escaped and continued down the mountain without him. The man, now deserted, had to make a decision on how to remedy his predicament.

As I watched, he laid down straight as an arrow, put his arms tightly against his sides, pointed his feet straight down the mountain, and shot down like a bullet to the bottom. The beach crowd roared with delight. Watching the expertise and/or the ineptness of the ski and boarding participants was highly entertaining. Upon Garrett’s return, we ventured up the chairlift and down the gondola back to River Run Village.

Now, some might think I wasted my ski day; I, on the other hand, had a magnificent time observing others from the comfort of my chair on the sun-drenched snow beach. Skiing in Colorado during the first week or two of March is the best, and the last four years have been blessed with glorious sunshine. 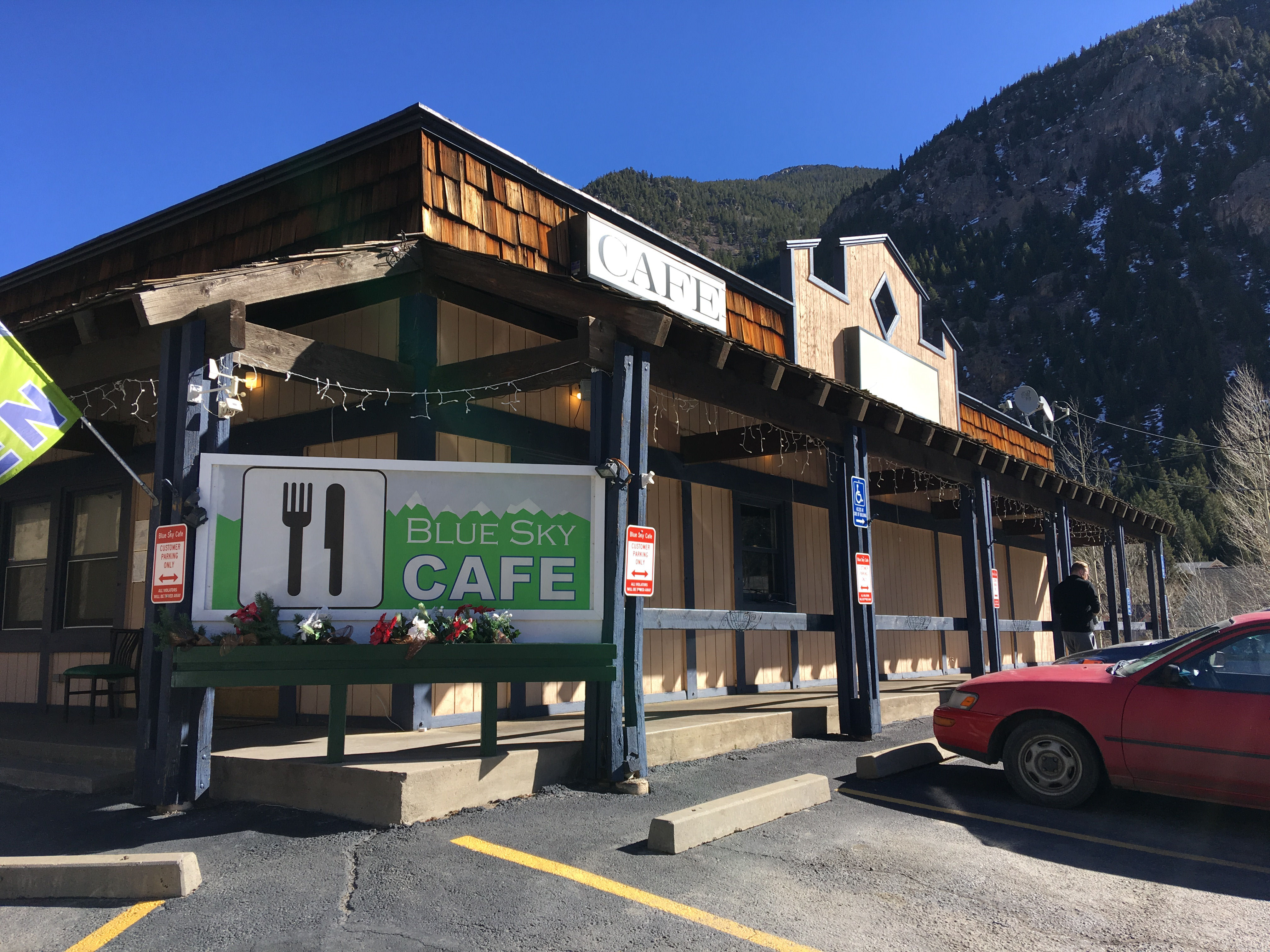 Adorable and tasty, The Blue Sky Cafe in Georgetown

We began our travels back down the mountain to Denver, stopping for breakfast at the Blue Sky Café in Georgetown. Georgetown is wedged between two mountains along Highway 70 about halfway to Denver. The town buildings appeared as though they were taken right out of an old Western movie. The little café seats 20 people and serves family-style food. The combo plate included a crispy Belgium waffle, two eggs cooked any style, bacon, or sausage, and crispy fried potatoes. Accompanied by a side of coffee and fresh orange juice, it was a perfect start to the day. Garrett and I continued our drive past a tiny frozen lake in Georgetown and caught sight of a man ice fishing in the middle of the lake.

It is my opinion that it is not necessary to be a die-hard skier or boarder to enjoy the Colorado snow. Take a drive up to Keystone, make one run down Mozart, sit on the snow beach with a BBQ beef sandwich and a drink, pull out a book and read in the sunshine, or watch the free entertainment that takes place before your eyes.