Art Adds Beauty to our World 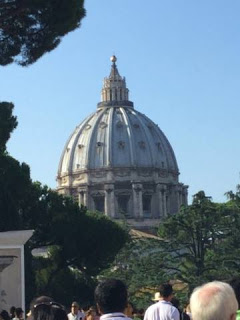 Imagine a world with no color, no dimension and no art. The creator of all things crafted the earth in all its beauty and wonder. God is the master artist and he gifted many humans with the ability to create art of their own. Art, in all its forms is seen all over the world. Vatican City is the smallest country in the world with 840 inhabitants. The city embraces the headquarters of the Catholic Church. The Vatican, Sistine Chapel, several museums and St. Peter’s Basilica all reside within the city walls. These buildings hold some of the most famous and beautiful artwork in the world.
The construction of the Basilica took 120 years beginning in 1506 and ending in 1620. Decorating the facility in the Baroque style took an additional 200 years. Baroque art is loud, cumbersome and active. It consumes all available space and satiates it with something beautiful. Although the Basilica is completely decorated, work continues on a regular basis to repair, clean and induct new pieces of art. During our tour I was fascinated to learn that there is not a single painting or tapestry within the Basilica. 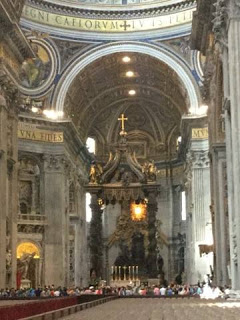 Every picture is made of stone. Different colored stones from all over the world were gathered and broken into tiny pieces and then used to create colorful mosaics. Mosaics are displayed throughout the Basilica portraying various moments in the life of Christ and various saints. There are also depictions of other religious thoughts. The Bible says, “And I say also unto thee, That Thou art Peter, and upon this rock I will build my church; and the gates of hell shall not prevail against it.” Matthew 16:18. St. Peter was the rock that the Catholic Church was built on over 2000 years ago. The Basilica is a literal example of that rock and the foundation of the early Catholic Church. Another unique art story resides in the history of a painting in the Sistine Chapel.

Michelangelo was commissioned by the pope in 1508 to paint the ceiling of the Sistine Chapel. At that time, Michelangelo was a twenty-three year old sculptor that had never painted in his life. During his education, Michelangelo was given special permission to dissect the dead in order to study the body in such detail that he could recreate it in the most lifelike fashion as a sculptor. He studied under many great Renaissance artists; Lorenzo de’ Medici, Bertoldo di Giovanni and Ghirlandaio. There were some that did not appreciate Michelangelo’s work.
One of the most famous frescos in the Sistine Chapel is “The Last Judgement.” Biagio di Sesena was the master of ceremonies to the pope and he did not feel it was appropriate that Michelangelo painted nude figures. He repeatedly complained and voiced to others that the artist needed to put clothes on his figures. The pope did not agree with Biagio’s appeal and finally Michelangelo got angry and struck back at Biagio by including him in his famous painting “The Judgement.”

Biagio is located in the lower right corner of the painting. He is nude, but his private parts are concealed by the head of a snake biting them. The snake is wrapped around his body and Biagio is painted with donkey ears. Artists are often thought of as temperamental. I guess it does not pay to make an artist angry. You may find yourself immortalized in a painting, displayed in a compromising or embarrassing way. This painting could then become famous and be exhibited in a prominent place for all time for millions to see. So be kind to the artists of the world, they add to its beauty!