Home » When High Winds Cancel Your Sea Kayaking Tour What Do You Do? You Go Sailing! 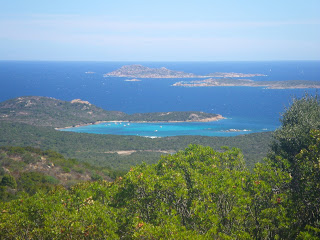 Sardinia Italy is the Italian’s version of paradise. The sun blazes in the sky reflecting off the turquoise seas and there are more beaches than you can count. We selected this island because we wanted to spend time at and on the water. Our sea kayaking tour was scheduled months in advance of leaving the United States. Claudio, our guide, called the day before our scheduled tour and announced that the winds were very bad and he himself almost did not make it back to shore that day when he was out paddling. He said, “We may have to cancel, but let’s wait and see tomorrow.” 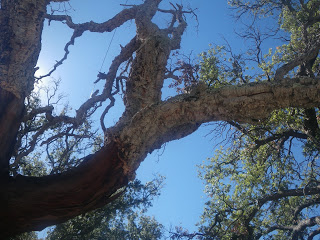 Tomorrow came and the wind was worse. Claudio offered to take us on a land tour four-wheeling in the mountains. We agreed and it was interesting. We were educated in the history and culture of Sardinia. Did you know that cork, the little top that fits snuggly inside your wine bottle is the bark from a cork tree? I didn’t know this existed. The trip was somewhat interesting, but we really wanted to be in or on the water. I did a little research, called, and scheduled a sailing trip for the following day. 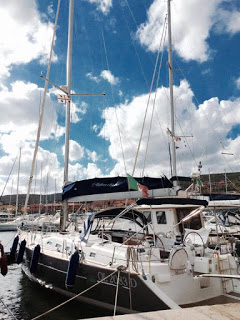 It was windy! The sailboat necessitated two crew members and a captain to command the trip. We motored away from the dock and as soon as the sail was lifted, these words echoed through my mind:

Just sit right back
And you’ll hear a tale
A tale of a fateful trip,
That started from this tropic port
Aboard this tiny ship.
The mate was a mighty sailin’ man,
The Skipper brave and sure.
Five passengers set sail that day,
For a three hour tour,
A three hour tour.

The ship set aground on the shore
Of this uncharted desert isle
With Gilligan,
The Skipper too.
A millionaire and his wife,
A movie star,
The professor and Mary Ann,
Here on Gilligan’s Isle. 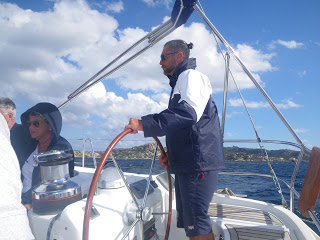 After a few moments I relaxed and released control of the situation. Sometimes it is easier for me to let go when I know I can do nothing about a situation. I looked around at the distance between our current spot in the sea and the various islands surrounding us. I determined that I could swim the distance and drag Brittney with me if necessary. The boat tilted to the port side at a 45 degree angle and those of us on that side could literally touch the water with our hands. It felt like we were going to capsize. Everyone was a bit scared, but I told Brittney to watch the captain’s face. If he was smiling we were all “good,” if he looked concerned, than we best start praying. 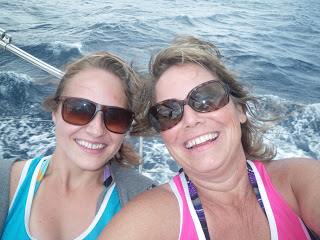 It was a wild ride, and every half hour or so the captain would give orders to the crew and they would shift the sails. This would tip the boat to the starboard side and the passengers on that side were then headed into the water. After an hour of terror, we anchored in a beautiful, sheltered cove, swam at the beach and then had lunch back on the boat. The wine flowed, tuna ceviche and other appetizers were served and the passengers relaxed. Al dente pasta with red sauce was presented to the table with more bottles of wine. 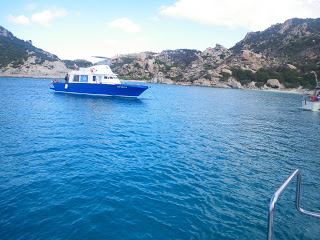 Wine won the race against water at a ratio of 4 to 1. After an hour, the espresso was poured. Prior to lunch the boat was relatively quiet with the exception of the Italian family on board. Grandma and grandpa, their daughter, her husband and their young 12 year old son formed the family. Once food and wine began to flow at the table, conversation commenced amongst the passengers.
English was a shared language, so we deliberated about food, politics and wine. The crew cleaned up the remains from lunch and we headed off to another area. The winds continued! The Italian grandpa thought it was funny when the boat leaned into the water on the opposite side that he was on. He began to chant “Ciao” which means,” bye,” in Italian and wave to us. We on the opposing side chanted, “Ciao,” in return when his side was dipping into the sea. The Italians were much more animated after lunch. I think it was the wine. A few passengers felt sick and as time went on the Italian grandma got more and more expressive. 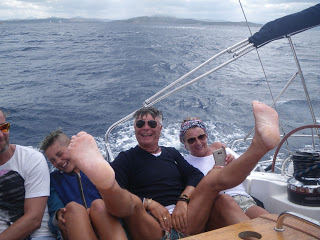 Grandma was so stereotypically characteristic of a loud Italian woman, talking with her hands, I had to laugh. It seemed like she was right out of an old movie and each time the boat shifted with her side going under she shouted inappropriate words in Italian and gave the high side and the captain a double birdie. It was crude and rude, but somehow in this situation she was comical. So if you are looking for a new kind of adventure, go sailing on a really windy day with an Italian grandma and grandpa. Just make sure they serve lots of wine at lunch.