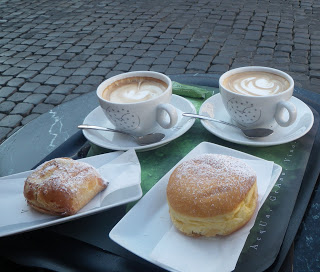 “Due cappuccinos e due napoletano,” was Sophie’s cry in the bustling café in Rome. Liz, played by Julia Roberts, in my favorite movie, “Eat, Pray, Love,” was desperate for her morning coffee. Unfamiliar with the customs, and inexperienced in the language, she could not seize the attention of the bartender to place her order. After two weeks in Rome, she struggled without hope and without coffee. Sophie, Tuva Novotny, rescues her by yelling out their order and they quickly become friends. This scene played over in my mind as I ordered cappuccinos for Brittney and me on Tuesday, our first morning in Rome. We relished the cappuccinos and pastries in Piazza Farnese Rome before commencing on our tour for the day.

The piazza was the designated meeting spot for the Small Group Rome Food Walking Tour. Our guide, Francesca, from www.gourmetaly.com, met us with five additional guests. Francesca was a true lover of fabulous Roman food and their ingredients. She knew her subject well, and shared her enthusiasm with the group. The tour offered a variety of tastings from traditional Roman foods. The Campo de’Fiori market tendered the freshest in seasonal local vegetables and fruits. The splash of colors emanating from each stall put the produce section of Whole Foods Grocery to shame. Each luscious fruit is sold at its peak. Romans shop several days each week to insure that the produce they consume is the best it can possibly be. This particular farmer’s market was founded in 1870 and is the oldest one in Rome. 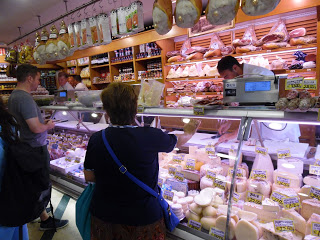 Rome boasts twenty-six farmer’s markets and each is vital to the Roman lifestyle. Campo de’ Fiori hosts an amazing deli shop still owned by the original family. Whole legs of prosciutto di Parma dangle from the ceiling satiating the room with the scent of salted ham. Owners of the shop standby patiently, waiting for patrons to make their final selections. With the entire back wall weighted down with assorted Italian cured meats, customers struggle to decide. The shop is full of the finest Italian specialties, meats and cheeses. The Buffaletto cheese, produced just a day before selling, is milky white, moist, and salty. This cheese is specially sourced from swampland south of Rome and north of Naples. The oldest bakery in Rome known as a, Forno, resides just around the corner from the piazza.

Italians begin each day with a sugar and caffeine rush. The perfume of hot expresso, followed by the taste of a warm frothy cappuccino is linked with a flakey sweet bite of pastry filled with fruit, cream, or chocolate. The day begins with these delicacies, but soon is followed by an equally important food group known as pizza. Pizza is a traditional snack generally consumed more than once a day in Rome. 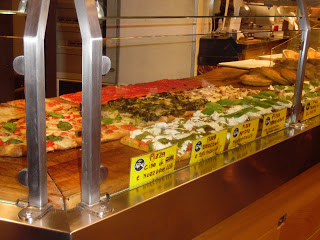 Roman pizza is long and rectangular in shape and made with a thin crispy crust. Several times each day, the air is filled with a fresh whiff of Pizza Russa. This pizza is made of dough, tomato sauce and olive oil permeates the air. It is delicious is all its simplicity. Pizza Bianca is simply cooked dough with olive oil. The next stop on our journey was the Jewish Ghetto.

This area is a memorial to all the Roman Jews that were moved and confined by the Vatican to an undesirable part of Rome in 1555. This area, prone to flooding, is referred to as the Jewish Ghetto. These Jews were eventually moved to concentration camps and assassinated. The small number of residents still residing there are predominantly Jewish. However, this neighborhood is no long poor, but considered very affluent. The food reflects the culture. We sampled fried zucchini blooms and Stracitelli. The crispy blossoms were lined with mozzarella and anchovies creating a crunchy, salty bite with a velvety finish. When taking a bite of fried Stracitelli, you first taste the creamy tomato risotto followed by the smooth melted mozzarella cheese. After eating our fill we moved on to Trastevere.

Trastevere is across the river from the city center of Rome. This hub typically embraces many Romans and tourists during the evening hours. Interwoven with cobblestone streets, restaurants and petite shops, the area is a fashionable place to amble. Brittney and I settled into a restaurant and enjoyed local wine and Bucatini pasta with tomato sauce, pork cheek and Pecorino Romano with the group. The tomatoes bursting with appropriate sweetness, produced from an optimal amount of sunshine, were paired with salty Pecorino cheese and finished with pork cheeks cured in garlic, salt and various spices. The tour concluded here and we headed back to our apartment for a short siesta before preparing for dinner. 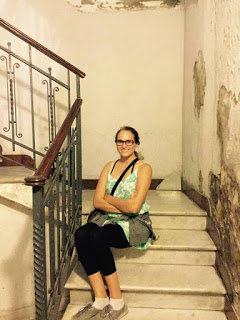 Our apartment offers the true Roman experience. Located on a quiet street, we climb the 84 steps to reach our space. The walls are peeling from years of existence. Marble steps are broken by the weight of patrons carrying their belongings up and down over the years, creating an atmosphere never found on young American soil. The disrepair adds a charm and again reminds me of my favorite movie. When Julia queries about the scaffolding in the center of the house she considers renting, her potential landlord replies “It is safe, it holds up the ceiling.” Climbing the spiral stairs there is no guilt over the pasta I consumed at lunch. The apartment hosts three bedrooms, two bathrooms, and a small kitchen. Currently one room is rented to an Italian gentle and the other to two young ladies from Poland.

Looking out the window of our apartment, I feel as though I have stepped back in time. Studying the courtyard below, I spy well-tended flowers, simple patio furniture and space for friends and family to share meals together. The air changes very little in the evening, but there is slight relief from the burning sun. After a short siesta, we get ready to go out for dinner. The walk to the piazza area in Trastevere is only fifteen minutes from our apartment. In only two days, we have discovered it is best to share a meal ordering several courses to taste. This prevents an uncomfortable finish to our evening. 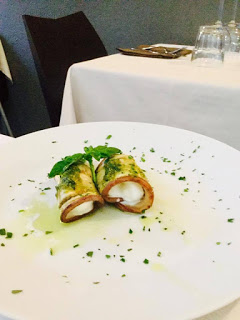 At dinner, the waiter suggests eggplant rollatini which arrives cold, filled with fresh creamy mozzarella and topped with basil pesto. In this heat, the cold appetizer when washed down with a seasonal peach Bellini, hits the spot. The second course Pasta Funghi, linguini with mushroom sauce, is made with a touch of olive oil, porcini mushrooms, and a deep mushroom broth. The segundo, or second course, Veal Saltimbocca can be cut with a fork and melts in my mouth.

The thinly sliced veal, lightly floured and sautéed in butter, is topped with prosciutto slices and sage leaves. Confit seasoned potatoes nestle up next to the side of the veal. To finish the meal we savored a sampling of formaggio, cheese. After 22:00 the streets are filled with live entertainment. During our late dinner, a couple played Middle Eastern sounding instruments to serenade us. 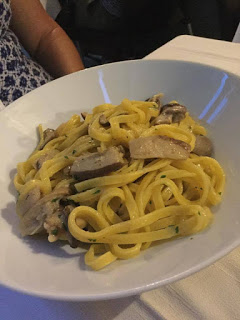 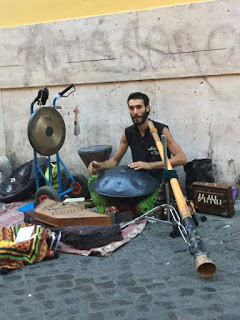 At 23:00 it was time to walk back to the apartment for bed. Prior to stepping out from behind our table, located on the side patio of the restaurant, we noticed people reach in their bags for umbrellas. Gifted with a light rain, we walked back to the apartment and celebrated a break from the heat. It was a long day, filled with amazing food, cultural experiences, new acquaintances and a renewed appreciation for authentic Italian food.