Home » Hanging from Cliffs…Why Not? Canyoning with Simone Saturday, September 3, 2016

Hanging from Cliffs…Why Not?
Canyoning with Simone
Saturday, September 3, 2016 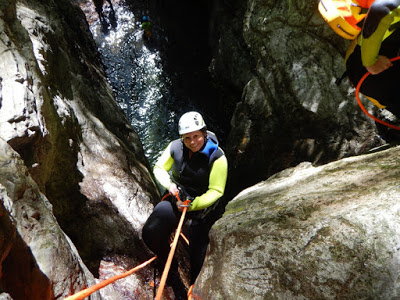 This is the first repel, soon I disappear beneath the rock on the right.

Some might think we were crazy, maybe we were. I paid good money for this madness and I’m 52 years old. Simone, from Toscana Adventure Team, picked us up outside the ancient walls of Lucca, a medieval city in Tuscany, Italy at 8:40 in the morning. Driving east we admired the rolling hills covered in an array of greenery for about forty-five minutes. We arrived at our starting point and within an hour we were joined by sixteen young twenty-something Italians ready to go adventuring with us. Canyoning is a popular activity all over the world. 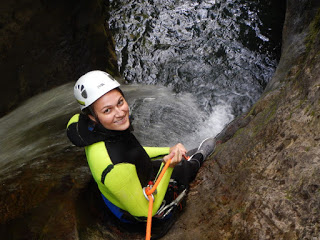 The definition of Canyoning, or Canyoneering as it is known as in the United States, is an adventure sport combining rock climbing, bouldering, with hiking, cliff jumping, repelling, sliding down natural slides, and challenging swimming. Canyoning requires physical strength, daring, appropriate gear, trust, and maybe a bit of insanity. Well, I have four out of five of those traits, I’ll let you guess which. Each participant in our group was handed a wetsuit, helmet, ropes with an 8 ring and carabiners, and a harness. I don’t know who designed the wetsuit, but whoever it was did not have a woman’s body in mind when fashioning it. 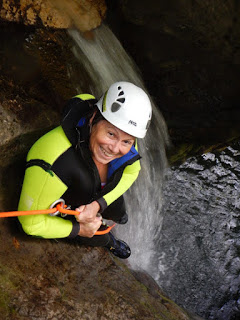 I for one am not the same width from the bottom of my legs to my butt. The suit however, is intended for someone that is. Now, picture yourself standing in the sun in 90 degree weather, struggling to slither into a second skin that is not formed the way your body is. It was an act of shear will and strength to achieve any success. Brittney and I watched one lovely young Italian couple work together on this endeavor. The young man shimmied into his suit with no trouble. His petite, yet shapely girlfriend was another story. 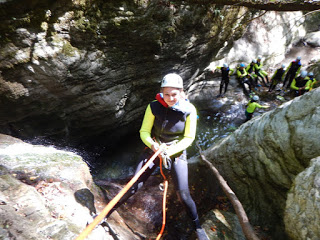 She tugged the suit up to the middle of her thighs and there the trouble began. She jumped and pulled, yanked and jerked to no avail, the suit wouldn’t go higher. The butt portion of the suit was still 6-10 inches to low. The obliging boyfriend attempted to assist his woman. He grabbed the butt portion of the wetsuit and desperately tried to shake her into it, until all her parts were in the appropriate sections of the suit. It was hysterical to watch and the young woman’s laughter echoed through the canyon. Eventually, everyone was zipped into their suits. Simone assured me that, “Putting on the wetsuit was the hardest part of the day.” We headed to the drop off point, donned our helmets and the remaining gear, and headed down into the canyon. 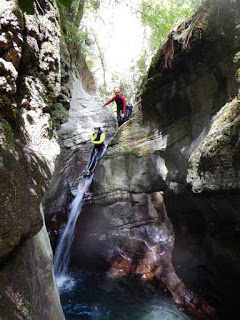 The rocks varied in size. Some were small while others were two to five feet in diameter. Climbing required some balance, but my creaking knees made it over and down most rocks with no problem. Soon we came to the water and the first repel. The 25 foot drop was looming and required that you go under a huge overhanging rock to descend down the crevice. Simone instructed us how to repel ourselves down. He offered to manage the rope if I wanted, but said I should try it myself, “You can do it Tracy” was his opinion. OK, ok was my thought, I can do this.
I can remember the instructions. I buried the initial panic that crept up inside me when I contemplated the fact that my memory isn’t what is used to be. What if I forget something important that he told me to do, or not to do, during the instructions? Simone handed over the rope and said, “Smile for the camera.” His final words before letting go were, “Aw, don’t let go of the rope.” Simple, yes, remember, yes, don’t let go of the rope, remember, don’t let go of the rope. These words reverberated through my head for the next 3-4 minutes while I hung precariously from the cliff, gripping the rope with one hand and letting it slide through the other while descending downward toward the smallest pool of water I’ve ever seen. 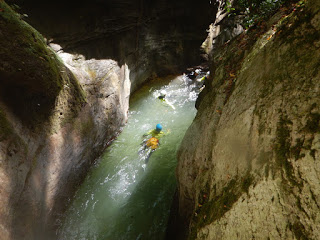 Swimming through part of the canyon

One meter from the surface I let go and plunged into the icy water sinking down deep into the blackness. Covered with at least five feet of icy water, my body temperature raced down from a sweltering 90 degrees plus, to what felt like 60 degrees. It took my breath away. The plunge and accomplishment was exhilarating! The initial repel was followed by several water slides with plummets into pools of frigid water, five additional repelling experiences, exhausting climbs over rocks of all sizes, swimming, and finally a jump from another precipice.

After 2 kilometers of Canyoning, my body was depleted of any remaining energy. Canyoning requires the use of every part of your body. You must use your mind to pay attention, your legs, arms, feet and hands to avoid slipping or falling, and your butt to slide. For two and a half hours our group worked its way down the canyon to the starting point. We peeled off our second skins, often with the assistance of someone else, and traveled to a local trattoria to share an authentic Italian lunch.

Italians are known for some great food. Antipasto is the first course of a traditional meal. The antipasto general consists of small bite size snacks to be eaten at the beginning of the meal. This tiny trattoria delivered fifteen different types of antipasto on huge platters. Simone had invited others to join us for a total of 24 Italians, and two Americans, Brittney and I. The trays were placed at varying sections of the table and they just kept coming. Arancini, rice balls stuffed with cheese, bruschetta, potato tarts, Italian meats and cheeses, stuffed zucchini blossoms and more.

After we had our fill, the pasta arrived. Fresh spaghetti cooked al dente, gently tossed with a light homemade tomato sauce and topped with Parmigiano Reggiano. Wine, beer, sodas and water were relinquished to the table for our consumption. The lunch ended with espresso and the bill was 13 Euros each, which is the equivalent today of about $14.75 per person. The people and events of the day were fascinating. It was an invigorating experience both as a challenge and cultural event. If you ever feel the need to challenge yourself, overcome your fears, and give your body a beating, I highly recommend joining Simone for a Canyoning trip in Tuscany. It’s a rush!